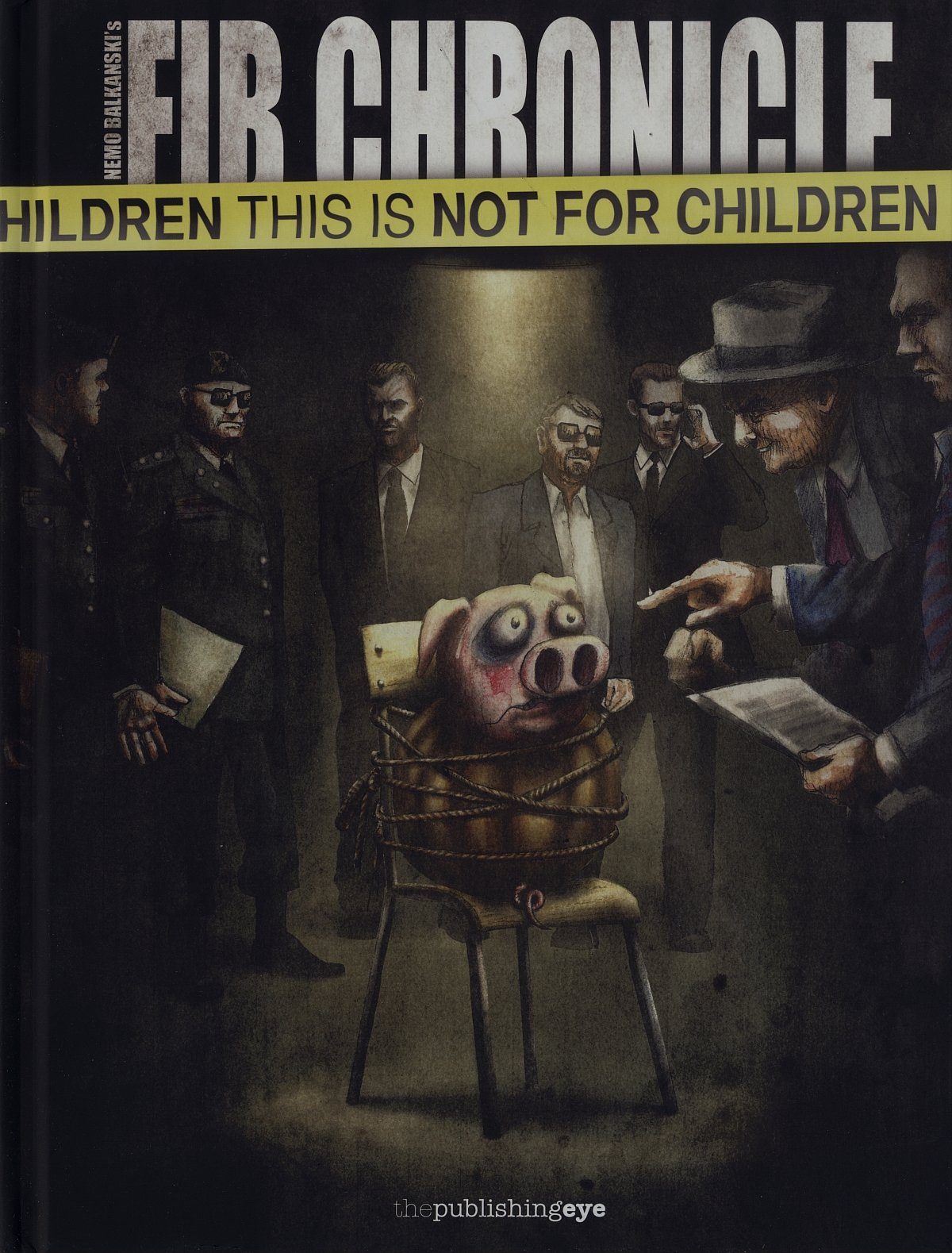 The most wonderful thing about the comics medium is the limitless ways stories and art can be combined to educate, elucidate and entertain. For every Hergé there’s a Harvey Pekar, for every Alfred Bestall a Johnny Ryan (and John Ryan too) and so on, and there are comic strips to suit literally every age and temperament.

Some of the most evocative and addictively uncompromising efforts that I’ve seen in quite a while appear in this collection from Belgrade émigré Nemanja Moravic Balkanski, whose stunningly disturbing spoofs and edgy cultural pastiches have been gathered into a magnificent oversized full-colour hardback FIB Chronicles.

Balkanski was born in Belgrade in 1975 and, after mastering a multitude of artistic disciplines from comics to graphic design, theatre arts to film-making, and poetry to performance, emigrated to Vancouver 2006. Much of this vintage material contained here (also available as an app) come from his Balkan days, represented in this disquietingly substantial and blackly comic tome under the guiding conceit that the individual escapades of a nightmarish cast of distressing ne’er-do-wells and uncanny outcasts have been gathered into a damning dossier thanks to the scurrilous non-efforts of the far-from-intrepid clandestine agents of the Fabulous Investigation Bureau.

The iconoclastic strips gathered here date from 1998-2005 and, supplemented by new bridging material in a staggering variety of artistic styles, describe a dark and disturbing underworld of barely perceived and unwisely ignored peril and surreal threat wrapped up in careful pastiche and savage parody…

US cop dramas come under the cosh when corruptly hip detective Cash Money experiences ‘Hair Fear’ and tackles feminist terror in ‘W.T.N. Griffit’ whilst tragic, plucky waif Boy Lyndo gets his shot at a happy ever after in ‘The Final Episode’ and the bizarre habits of a cult of Mel Gibson impersonators is exposed in ‘Gipsons vs Graduates’after which gay lovers walk hand-in-hand down the wrong street in the weird war story ‘Jelly & Butter’ – a yarn conceived by Balkanski’s long-time collaborator Vladimir Protic.

A theatrical slasher-killer appears in ‘Space (the Final Frontier)’ and scatological stoner anthropomorph ‘Bud Bunny’ plays not-so-nice games with the other animals before fashion-plate Eau de Colognefalls foul of the harpy-ish harridans known as the BigDos in ‘Trigger’and we are exposed to ‘Johnny McWire Getting the Beating of his Life’and ‘Mr. Friday Night’ goes home alone yet again…

Booze and Balkan warriors come under the microscope one more in ‘Galactica, the Space Bottlesip’ (based on Branimir “Johnny” Štulić’s poem “Sons of Bitches”) after which the file devotes a lot of crazed and crucial pages to cybernetic dreamer Digital Standstill’s climactic confrontation with ‘BigDo’s’ before we observe a salutary encounter with the ‘Psycho from 134th Street’ (scripted by Protic).

The battle against creeping communism is examined in the uplifting tale of ‘Little Mexico: El Dentista’, the nature of modern relationships in ‘It is My Friend’ and the value of introspection in ‘Sam Lr. Stag: His Life was a Drag’ before the life of a fascist monster is dissected in ‘Shalken Rösse’ and we are treated, in conclusion, to the meteoric rise and political acumen of the transcendent of ‘Melon Pig’, courtesy of Protic and Balkanski…

With additional articles, ‘Declassification Files’, a glossary of new words and expressions and even a few game-pages for the strong-stomached, this tainted love-affair with life’s moist and fetid underbelly is a dank graphic delight that not even every mature and cosmopolitan reader will enjoy: but for those with just the right blend of world-weary insouciance and malignant, undemanding innocence the words and pictures married together here will strike an unforgettable chord.

Look for more at The Publishing Eye