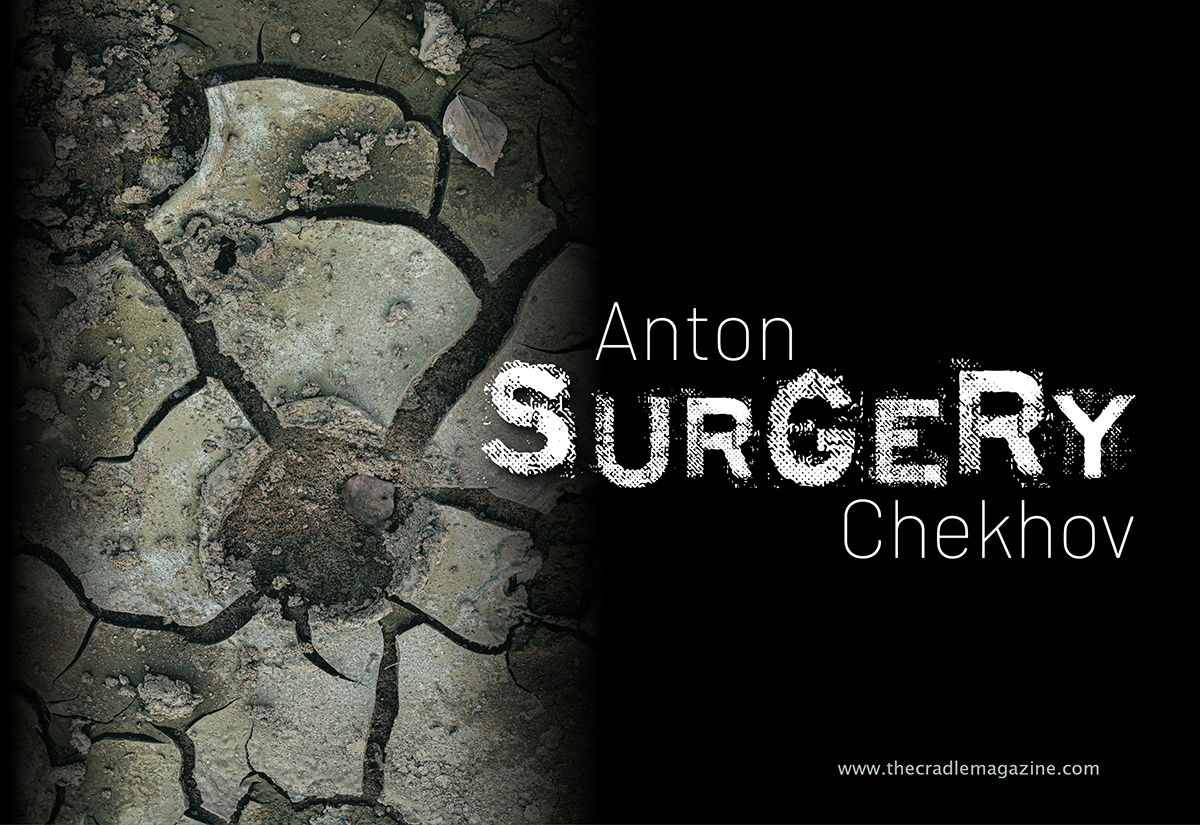 AZEMSTVO HOSPITAL. In the absence of the doctor, who has gone off to get married, the patients are received by his assistant, the feldscher Kuryatin, a stout man of about forty, whose face wears an expression of amiability and a sense of duty. He is dressed in a shabby pongee jacket, frayed woolen trousers, and between the index and middle fingers of his left hand carries a cigar that gives off a stench.

Into the waiting room comes the sexton, Vonmiglasov. He is a tall, heavy-set old man, wearing a brown cassock with a wide leather belt. He has a cataract on his right eye, which is half- closed, and on this nose there is a wart that from a distance resembles a large fly. He stands for a moment trying to locate an ikon; unable to discover one, he crosses himself before a bottle of carbolic acid, then takes a loaf of communion bread out of a red handkerchief and, with a bow, places it before the feldscher.

“A-a-a-h… greetings,” yawns the feldscher. “ What brings you here?”

“A blessed Lord’s day to you, Sergei Kuzmich. I’ve come to your worship–verily and in truth is it said in the Psalter. ‘Thou givest them tears to drink in great measure.’ The other day I sat down to drink tea with my old woman and–dear Lord!–not a drop, nothing could I swallow. I was ready to lie down and die. One little sip and there was no bearing it. And it’s not just the tooth itself, but this whole side–it aches and aches! It goes right into my ear, if you will excuse me, as if a tack or some such object was in there. Such shooting pains, such shooting pains! I sinned and I transgressed, shamefulness have I passed the days of my life! It’s for my sins, Sergei Kuzmich, for my sins! His Reverence rebuked me after the liturgy: ‘You are stammering, Yefim, you talk through your nose. ‘You sing and nobody can make out a word you say.’… And how do you think I can sing if I can’t open my mouth? It’s all swollen, if you will excuse me, and not having slept all night–“

Vonmiglasov does as he is told. Kuryatin knits his brows and begins his examination. Among the teeth, all yellowed by time and tobacco, he discovers on that is ornamented with a gaping hole.

“Superstition.” The feldscher pauses. “It has to be pulled, Yefim Mikheich.”

“You know best, Sergei Kuzmich. That’s what you’ve been trained for, to understand this business; to know whether to pull it or use drops or something else. It’s for this that you, our benefactors, have been put here, God give you health, in order that day and night, till they lay us in our coffins, we should pray for you, our fathers–“

“It’s nothing,” says the feldscher modestly. He goes to one of the cupboards and begins rummaging among the instruments. “Surgery is nothing; it’s all a matter of a firm hand. Quick as you can spit! The other day the landowner Alexander Ivanich Yegipetsky came here to the hospital, like you, also with a tooth. He’s an educated man, asks all kinds of questions, goes into everything, wants to know the how and the what of things. He shook my hand and called me by my full name. He lived in Petersburg for seven years and hobnobbed with all the professors. I spent a long time over him. ‘In Chris’s name, pull it out for me, Sergaie Kuzmich!’ Why not? It can be pulled. But–this business has to be understood; without understanding–impossible. There are teeth and teeth. One you pull with forceps, another with molar forceps, and a third with a key. To each according.”

The feldscher takes up the molar forceps, dubiously gazes at the instrument for a moment, then puts it down and takes up the forceps.

“Now, sir, open your mouth wide,” he says, approaching the sexton with the forceps. “We’ll have that out quick as you can spit!” I only have to cut the gum a little, get leverage on a vertical axis, and that’s all.” He guts the gum. “And that’s all.”

“You are our benefactor! We are benighted fools, but the Lord has enlightened you–”

“Well, don’t make a speech just because you have your mouth open. That will pull easily. There are some that give trouble; nothing but roots to them. This wil–quick as you can spit!” He lays down the forceps. “Don’t twitch! Sit sill… In the twinkling of an eye.” Then, getting leverage: “The important thing is to get a deep enough hold,” pulling, “so that you don’t break the crown.”

“Don’t do that–do that! What’s the matter with you? Don’t grab me! Let go my hands!” Beginning to pull again. “In a minute– now–now!… You know, this business is no so simple.”

”It’s a question of–surgery. Impossible to do it all at once. Now– now–”

Vonmiglasov’s knees come up to his elbows, his eyes bulge, his fingers twitch, and his breath comes in gasps; perspiration breaks out on his crimson face and tears stand in his eyes. Kuryatin breathes audibly, shifting his weight from one foot to eh other, and pulls. An agonizing half minute passes… and the forceps slip off the tooth. The sexton jumps up, thrusts his fingers into his mouth, and feels the tooth intact.

“But you pulled it!” he cries in a wailing, and at the same time, derisive voice. “May they pull you like that in the next world! We humbly thank you. If you don’t know how to pull the tooth, then don’t do it! I am seeing stars!”

“And why did you grab hold of me?” The feldscher is furious. “I’m pulling and you’re showing my hands away and saying stupid things. Fool!”

“Do you think, you peasant, that it’s easy to pull a tooth? Just try it! It’s not like climbing up into belfry and rattling off a few chimes! ‘If you don’t know how, if you don’t know how!’ “he mimics. “Look, an expert has turned up! How do you like that? When I pulled Mr. Yegipetsky’s tooth–Alexander Ivanich, that is–he didn’t say anything, not a word! He’s a better man than you are, he didn’t grab me. Sit down. Sit down. I tell you!”

“I’m still seeing stars–let me catch my breath! Oh!” Vonmiglasov sits down. Don’t drag it out so long, just pull it. Don’t drag on it so, give it one quick yank!”

“Teach your grandmother to suck eggs! Oh, Lord, the ignorance of the people! Live with them and you go out of your mind. Open your mouth.” He inserts the forceps. “Surgery is no joke, brother. It’s not like reading the Scriptures from the pulpit!” Getting leverage: “Don’t jerk! The tooth appears to have been neglected for along time. The roots go deep.” Pulling: “Don’t move! There– there–don’t move–now–now—” A crunching sound is heard. “I knew it!”

For a moment Vonmiglasov sits motionless, as if numb. He is stunned and stares blankly into space, his white face covered with sweat.

“Perhaps I ought to have used the molar forceps,” mumbles the feldscher. “What a mess!”

Coming to himself, the sexton puts his fingers into his mouth. In place of the defective tooth he feels two sharp stumps.

“You mangy devil!” he cries. “They planted you on this earth, you fiend for our destruction!”

“Go on, curse me some more,” mutters the feldscher, putting the forceps into the cupboard. “Ignoramus! They didn’t treat you to the rod sufficiently at your seminary. Mr. Yegipetsky–Alexander Ivanich, that is–lived seven years in Petersburg, he’s a cultured man. One suit costs him a hundred rubles–and he didn’t swear. What sort of peahen are you? Don’t worry, you won’t die!”

The sexton takes the communion bread from the table and, holding his hand to his cheek, goes on his way.