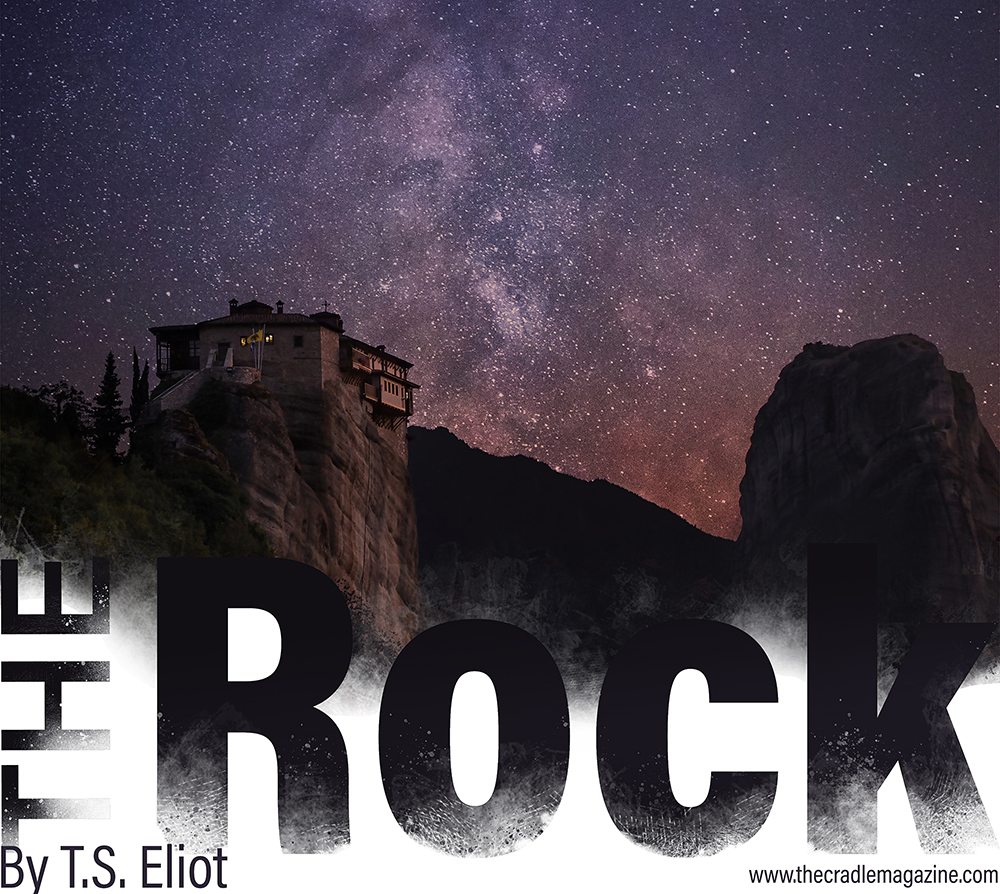 The Eagle soars in the summit of Heaven,
The Hunter with his dogs pursues his circuit.
О perpetual revolution of configured stars,
О perpetual recurrence of determined seasons,
О world of spring and autumn, birth and dying!

I journeyed to London, to the timekept City,
Where the River flows, with foreign flotations.
There I was told: we have too many churches,
And too few chop-houses. There I was told:
Let the vicars retire. Men do not need the Church
In the place where they work, but where they spend their
Sundays.
In the City, we need no bells:
Let them waken the suburbs.
I journeyed to the suburbs, and there I was told:
We toil for six days, on the seventh we must motor
To Hindhead, or Maidenhead.
If the weather is foul we stay at home and read the papers.
In industrial districts, there I was told
Of economic laws.
In the pleasant countryside, there it seemed
That the country now is only fit for picnics.
And the Church does not seem to be wanted
In country or in suburbs; and in the town
Only for important weddings.

The voices of the Unemployed:
No man has hired us
With pocketed hands
And lowered faces
We stand about in open places
And shiver in unlit rooms.
Only the wind moves
Over empty fields, untilled
Where the plough rests, at an angle
To the furrow. In this land
There shall be one cigarette to two men,
To two women one half pint of bitter
Ale. In this land
No man has hired us.
Our life is unwelcome, our death
Unmentioned in “The Times.”

What life have you if you have not life together?
There is no life that is not in community,
And no community not lived in praise of God.

And now you live dispersed on ribbon roads.
And no man knows or cares who is his neighbour
Unless his neighbour makes too much disturbance,
But all dash to and fro in motor cars,
Familiar with the roads and settled nowhere.
Nor does the family even move about together.
But every son would have his motor cycle,
And daughters ride away on casual pillions.

In the land of lobelias and tennis flannels
The rabbit shall burrow and the thorn revisit,
The nettle shall flourish on the gravel court,
And the wind shall say: “Here were decent godless people:
Their only monument the asphalt road
And a thousand lost golf balls.”

When the Stranger says: “What is the meaning of this city?
Do you huddle close together because you love each other?”
What will you answer? “We all dwell together
To make money from each other”? or “This is a community”?
And the Stranger will depart and return to the desert.
О my soul, be prepared for the coming of the Stranger,
Be prepared for him who knows how to ask questions.
О weariness of men who turn from God
To the grandeur of your mind and the glory of your action,
To arts and inventions and daring enterprises.
To schemes of human greatness thoroughly discredited.
Binding the earth and the water to your service,
Exploiting the seas and developing the mountains,
Dividing the stars into common and preferred.
Engaged in devising the perfect refrigerator,
Engaged in working out a rational morality,
Engaged in printing as many books as possible,
Plotting of happiness and flinging empty bottles,
Turning from your vacancy to fevered enthusiasm
For nation or race or what you call humanity;
Though you forget the way to the Temple,
There is one who remembers the way to your door:
Life you may evade, but Death you shall not.
You shall not deny the Stranger.

But it seems that something has happened that has never happened before:
though we know not just when, or why, or
how, or where.
Men have left God not for other gods, they say, but for no god;
and this has never happened before
That men both deny gods and worship gods, professing first
Reason,
And then Money, and Power, and what they call Life, or Race,
or Dialectic.
The Church disowned, the tower overthrown, the bells up-
turned, what have we to do
But stand with empty hands and palms turned upwards
In an age which advances progressively backwards?